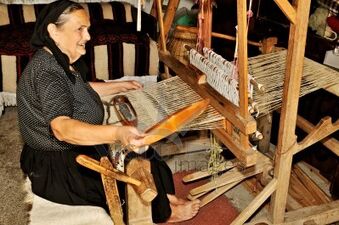 Dwyvach was a skilled weaver woman, whom Taran met in Taran Wanderer as he traveled among the Free Commots. She dwelled in Commot Gwenith, where she taught Taran the arts both of weaving and of patience.
This page contains spoilers. If you do not wish to be spoiled, do not read further.

Dwyvach had Taran wash, card, and spin the wool before he picked a pattern and threaded the loom for a cloak. After working on the garment for a while, he decided he disliked the pattern, and -- when Dwyvach asked whether he would rather go to the trouble of starting over, or wear a cloak with which he was unhappy -- chose to undo it. On finishing the cloak, which was quite handsome, Taran told Dwyvach he did not want to become a weaver, even though she declared he could become one of the best in Prydain.

Retrieved from "https://prydain.fandom.com/wiki/Dwyvach?oldid=8211"
Community content is available under CC-BY-SA unless otherwise noted.