Darkness is the thirteenth chapter of The High King. Here the hopelessness of the hero's efforts grows more evident as he loses more followers and is separated from his closest friends, whose fate remains unknown. Only magical aid can help, but even this brief boon is undermined by the myopic greed of a single individual. 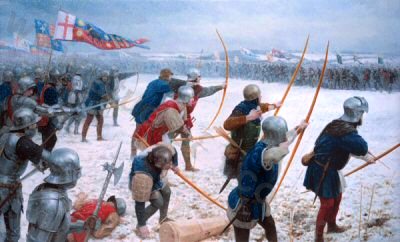 Taran, heavy-hearted after the death of Coll, led the Companions and the men of the Free Commots through the treacherous Hills of Bran-Galedd, guided by the sure-footed Llassar. They strove to overtake the Cauldron-Born on the way to Annuvin, but the path was a difficult one, and their attempts to harry the deathless warriors proved fruitless. Many lives were lost in desperate battle; for as Fflewddur noted, the closer the Cauldron warriors got to the Land of Death, the greater waxed their strength. 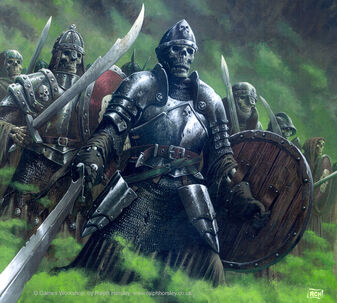 The deathless host attacked the Commot camp and left the battleground strewn with dead, then moved back toward the "swifter, easier way of the Red Fallows". Eilonwy and Gurgi went missing, and Taran had to make the hard choice to continue on without them. As they pursued the Cauldron army, a band of some hundred Fair Folk, led by "good old Doli", joined them under orders from King Eiddileg. 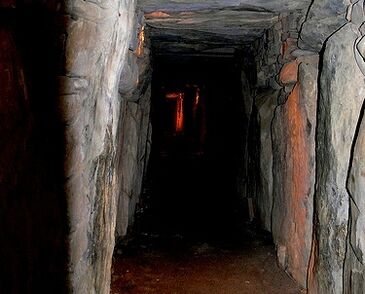 After some introductions and the wondering of the Commot men at the dwarf warriors, Glew mentioned his former lordship over his caverns, and Doli struck on the notion of using an old Fair Folk mine as a short-cut back to the Fallows.

The abandoned mine shafts were narrow and dark; Taran had to force himself to put his beloved friends behind him as he entered. Within, under torchlight Glew took an interest in the uncut gemstones eschewed by the Fair Folk as "rubbish", and began stuffing a sack full to bursting with them. After climbing upon a timber ledge to gather an especially large stone, Glew lost his footing and brought down the ceiling in an avalanche of rock and timber, cutting off further progress. Doli advised turning back, while Glew complained about losing all his gems, and reproached the others for being selfish.

Retrieved from "https://prydain.fandom.com/wiki/Darkness?oldid=7241"
Community content is available under CC-BY-SA unless otherwise noted.