Dallben was a wise old enchanter who resided at Caer Dallben and was Taran's mentor. At the beginning of The Chronicles of Prydain, Dallben was three-hundred and seventy-nine years old. He had acquired much of his wisdom from The Book of Three. Dallben was the only person able to use the Letter Sticks to evoke Hen Wen's powers of prophecy. Dallben was well capable of defensive enchantments, but hesitated to employ his powers for violence, and chose never to kill lest his powers be destroyed.

Dallben had a gray beard covering much of his "careworn" face. He wore a simple robe with no adornments over his "bony knees". 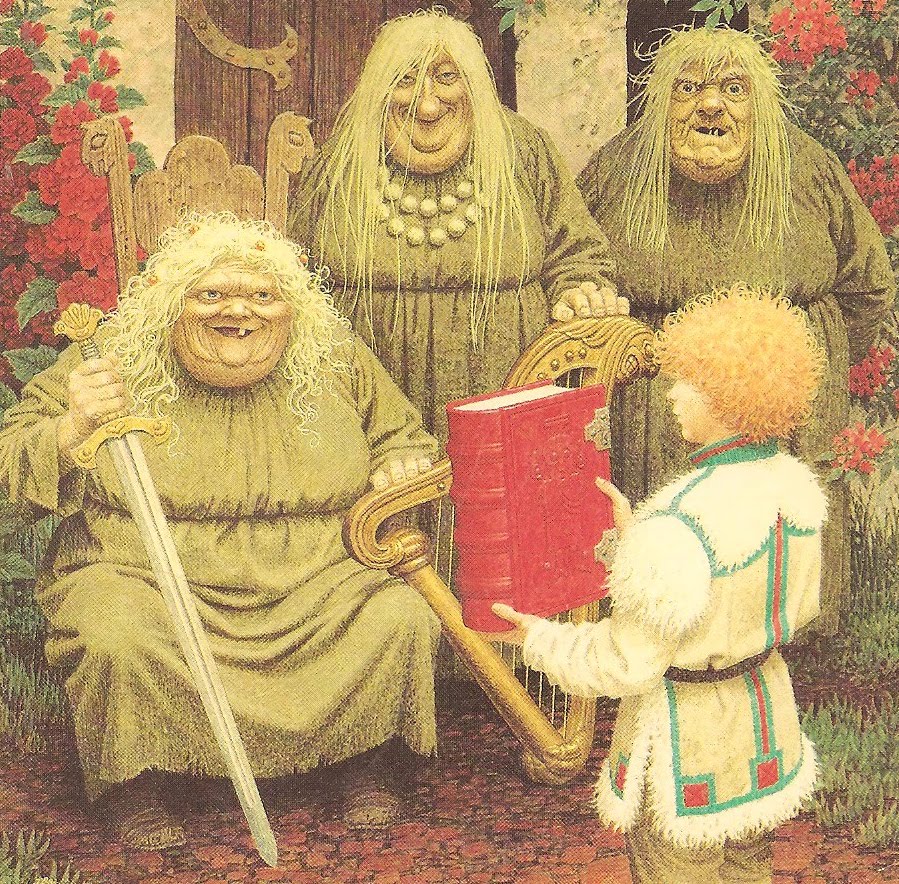 Dallben's story begins when he was a baby, found floating in a basket by Orddu, Orwen, and Orgoch in the Marshes of Morva. The enchantresses decided to keep him and gave him the name Dallben, reasoning that the name would last him his entire life.

In an incident similar to the Welsh legend of Gwion Bach, one day the boy was helping the three witches by stirring a potion they were making when it boiled over and scalded his fingers. When Dallben put his burned fingers into his mouth, he accidentally ingested some of the liquid. It was a potion of wisdom, and immediately Dallben was able to see the enchantresses for what they really were, and to understand everything around him. Deciding they couldn't have so much wisdom living under one roof, the enchantresses sent him out into the world, with three gifts to choose from before leaving.

The first gift was a sword, which would have made Dallben the most powerful warrior who had ever lived. The second gift was a harp, which would have made him the world's most famous bard, had he chosen it. Instead he chose the third gift, a book called The Book of Three. Orddu told him it contained everything that was ever known or would ever be known, and knowledge was something Dallben valued more than power or fame.

As he wandered away from the marshes, Dallben read non-stop from the Book of Three, rejoicing in the knowledge he learned from it. After reading an entire day, though, he began to learn of greed, hatred, war, winter and death. This proved almost more than he could bear; he finally stopped reading late at night, crying himself to sleep. When he awoke the next day, he found that he had aged into an old man overnight from the effects of the book. He almost tore the book apart, but decided to read on to the end. Learning of birth, renewal, and the never-ending cycles of life and the seasons rewarded him. Ultimately he learned the nature of hope. 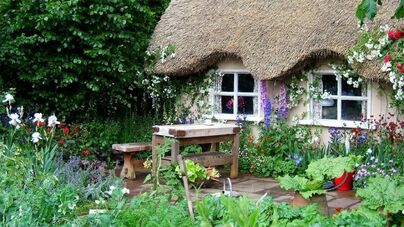 He sensed the danger the oracular pig Hen Wen was in from Arawn Death-Lord, but arrived at the farm where she lived too late to warn her owner, Coll. He maintained the farm while Coll was rescuing Hen Wen, his oracular white pig, in Annuvin. When Coll returned he allowed Dallben to stay at the farm as long as he liked. The farm became known as Caer Dallben.

Some time between the founding of Caer Dallben and the beginning of The Chronicles of Prydain, Dallben, during his studies of The Book of Three, learned about a future High King who would rule Prydain in peace after overthrowing Arawn Death-Lord. He set out to find this future king, hoping he could hasten the time of peace and prosperity the king would bring. He traveled over all of Prydain, searching for someone who had no station in life, as outlined in the prophecy. The only likely candidate he found, after years of searching and on the verge of giving up, was an infant he found on a battlefield where women and children had died as well as men. Dallben took the baby with him to Caer Dallben and named him Taran; secretly hoping the boy might be the promised king. He remained in Caer Dallben the rest of his mortal days, raising Taran and sharing his secret hopes only with Coll and Prince Gwydion. 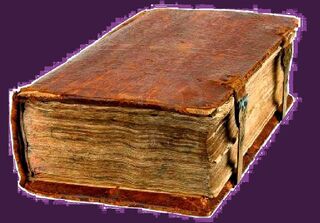 Dallben, roused from his meditations by Taran's playful dueling with Coll in the yard, brought Taran into his study and warned the youth of the Horned King, an evil warlord whose purposes were unknown. As the enchanter meditated, Taran tried to touch The Book of Three but the ancient tome burned his fingers. After Coll made Taran Assistant Pig-Keeper of Caer Dallben, a new commotion roused Dallben. First bees, then chickens fled the farm in a frenzy, and the enchanter and farmer both went to fetch the Letter Sticks in order to read the prophecy of Hen Wen on the matter. Hen, terrified, burrowed under her pen to freedom.

Sometime prior to the start of the book, Dallben called a meeting of war leaders, warriors and kings at Caer Dallben, in order to discuss Prince Gwydion's plans to seize and destroy the Black Cauldron. The old enchanter brusquely greeted the assembled heroes, then turned the floor over to Gwydion to explain the scheme. Soon afterward, Dallben presented Taran with his first sword. When the astonished Assistant Pig-Keeper asked breathlessly to know its "powers", Dallben patiently explained that it was a piece of metal fashioned into a rather unattractive shape. 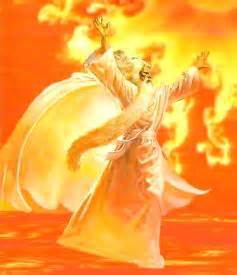 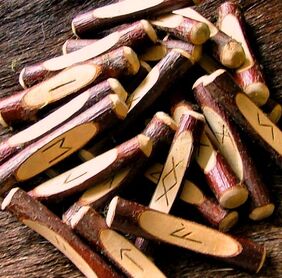 Dallben restored some of Gwydion's life, after Taran brought the Prince of Don back from the brink of death with his healing herbs. The old enchanter presented the Letter Sticks to Hen Wen, scribbled her answers on a parchment, then translated her rather vague, indecipherable prophecies to the assembled group.

Later he faced King Pryderi who had come to Caer Dallben to steal the Book of Three for Arawn. Here Dallben's true powers are revealed at last, from the fiery wards he had placed on the farmhold, to his refusal to take a life -- any life -- through which he had gained his moral authority over the ambitious tyrants of the land.

In the 1985 animated film, the Disney character Dallben is a combination of the two characters of Dallben and Coll from the books. In this version, Dallben is portly and beardless, with white, thinning hair. This animated version of Dallben bears little resemblance to Alexander's creation, but is a ringer for the animated Fflewddur Fflam: same round nose, bushy eyebrows, hinged mouth and chin. Disney's Fflewddur is skinny except for his potbelly, but otherwise so closely resembles Disney's Dallben that the two could be brothers.

In the film, Dallben is shown not only to be a loving guardian to Taran, but a wise scholar with connections to the Fair Folk.  He initially hints to Taran of Hen Wen's special powers before putting them into action when she begins to act strangely while Taran is attempting to give the pig a bath.  After sending Taran in his task to deliver Hen Wen to "the cottage at the edge of the Forbidden Forest," he gives further instructions to wait for him there, knowing that the coast would be clear.  Dallben makes a final appearance at the end of the film, seeing Taran's victory through Hen Wen's scrying and congratulating him in his quest.

In the manual for the Sierra game based on the film, compiled by Annette Childs, Dallben's backstory is modified from that of the Foundling, describing him as travelling from Caer Dallben to seek a future hero that would free Prydain from darkness, knowing that this hero would come from no position in life.  As he searched, a grievous war broke out, forcing Dallben back to Caer Dallben.  During his return trip, he spotted the aftermath of the war where every man, woman, and child, regardless of social standing, had been slaughtered.  Dallben soon found an infant in swaddling clothes in a brush near the field of dead bodies, not being able to tell where this child came from or who his parents were.  This was when Dallben realized that this baby was the future hero he was looking for, naming the child "Taran" and raising him as his own. 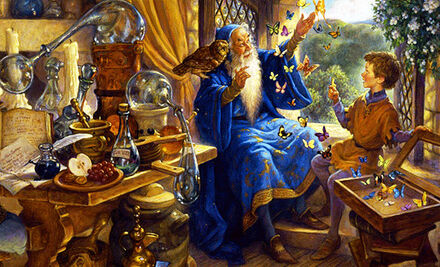 The figure of the elderly enchanter who raises an orphan boy to kingship is decidedly evocative of the legends of Merlin and Arthur, in a narrative first created by Geoffrey of Monmouth in the early 12th century, and thereafter taken up by many authors, right up to the present day.

The name Dallben, which in Welsh may mean "Blind Chief", appears in the Welsh Triads, specifically in the Red Book of Hergest (Welsh: Llyfr Coch Hergest), a large vellum manuscript written between 1382 and 1410. Under the section titled "These Are the Triads of the Horses" is a subsection:

And the third, Coll son of Collfrewy, tending the swine of Dallwyr Dallben in Glyn Dallwyr in Cornwall. And one of the swine was pregnant, Henwen was her name. And it was prophecied that the Island of Britain would be the worse for the womb-burden. Then Arthur assembled the army of the Island of Britain, and set out to seek to destroy her. And then she set off, about to bring forth (?), and at Penrhyn Awstin in Cornwall she entered the sea, and the Powerful Swineherd after her. [...]

23. Three powerful swineherds of the Isla[n]d of Prydain. [The first two are listed.] And Coll son of Collfrewy, who kept the ancient sow of Dallweir Dalben, who went burrowing as far as Penryn Awstin in Cornwall, and there going to the sea, landed at Abertorogi in Gwent Iscoed, and Coll son of Collfrewy having his hand on her bristles, wherever she went on the sea or on the land [...].

Author Lloyd Alexander considered making his Dallben blind based on the meaning of his name, but then decided it would complicate the story overmuch.

The idea of Dallben receiving his wisdom from a second-hand tasting of a potion stems from the Irish legend of Finn MacCool. When the future leader of the Fianna was a boy, his teacher was the leprechaun-like druid Finnegas. The old druid had been trying for ages to catch the legendary Salmon of Knowledge, a fish that will grant all the world's knowledge to whoever eats it. With Finn's help Finnegas was finally able to catch it. While he went to find proper dressings for the salmon, Finnegas told the boy to cook it. Some of the oil from the frying pan splashed onto Finn's thumb, causing the boy to instinctively put the burned digit in his mouth. The salmon's knowledge -- derived from the consumption of hazelnuts from a holy tree -- flowed from the oil into Finn. Finnegas, seeing that the boy had acquired some measure of widsom, decided it was Finn's destiny to eat the salmon whole.

This story is similar to the Welsh tale of Gwion Bach, aka Taliesin, whose teacher Ceridwen bade him stir the Cauldron of Inspiration for one year in order to allow Ceridwen to complete her potion of inspiration. Upon completion of this potion, three drops sprang out and landed upon Gwion Bach's thumb. Gwion placed his thumb in his mouth to soothe his burns, resulting in his enlightenment.

Retrieved from "https://prydain.fandom.com/wiki/Dallben?oldid=8326"
Community content is available under CC-BY-SA unless otherwise noted.