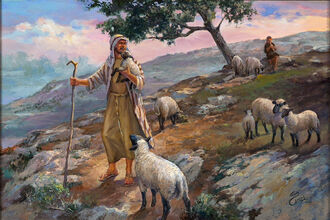 Craddoc was a crippled shepherd who lived in a hard, stony region the Hill Cantrevs, west of the Small Avren river. Taran of Caer Dallben met the shepherd during his wanderings across Prydain.
This page contains spoilers. If you do not wish to be spoiled, do not read further. 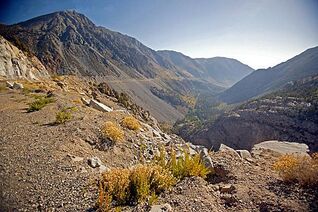 Taran met Craddoc after freeing one of his sheep from a thicket. Taran and his Companions were about to go their own way, when Taran saw the man stumble and went to help him. At Craddoc's dilapidated house, Taran told the shepherd of his quest to find the Mirror of Llunet. Craddoc then told Taran his own story, of how he and others had fought raiders to win the land, but that conditions in the hills had gradually forced all the others away. He explained that his wife had been with child; she had tried to persuade him to move for the sake of the unborn baby. Craddoc had refused, having fought hard to keep what was his. The child was born safely, he said, but the mother died. Craddoc despaired and regretted his obstinacy, especially once the infant boy's health took a bad turn. Soon a wise old man had passed by, and offered to take and raise the child. That man was Dallben.

Taran understood, to his regret, that he had found his father. Taran had dreamed of being highborn, not only for his own honor's sake but so that he might ask Princess Eilonwy to wed. Fflewddur Fflam left to report the events to Caer Dallben and thence to his own kingdom, but Taran and Gurgi stayed to help Craddoc repair the house and farmland before winter came. This tasks were achieved one by one, arduously but with a certain degree of pride, as Taran slowly and begrudgingly gained respect for Craddoc -- as a man if not as a father.

However, one winter's day, when it was exceptionally windy, Gurgi came crying to Taran that Craddoc had plummeted down a crevice. Badly wounded, the old shepherd had landed on a ledge. Taran was at once ashamed at his own feelings of exultant freedom, but this resolved in him to help Craddoc at all costs. He and Gurgi slid down the ravine wall, but Taran struck a sharp rock and lay wounded; Craddoc himself, Taran saw, was gravely injured. The shepherd awoke and pleaded with Taran to leave him, but the youth refused: his ties of blood and personal honor drove him to risk his own life for his father's.

Craddoc declared there were no such ties, and confessed he had lied to Taran.

His wife's child had died with her. Taran was not his son; he had only said so because he needed help in breathing life back into his land. Dallben had come and stayed but had never spoken of what he sought. Yet he confided that though at first he had leaned on Taran as a crutch, he had grown to love him as a father loves a son. Taran's hand dropped and found the Battle Horn that Eilonwy had given him, which contained a Fair Folk summoning. Taran blew the horn and lost consciousness; later he could only recall strong hands and ropes hoisting him up.

He awoke by the hearthfire to hear Gurgi's account of their rescue by the dwarfish mountaineers. When Taran asked how Craddoc fared, his companion's face wrinkled with misery and tears filled his eyes. Taran's own cry of anguish rang in his ears.

Retrieved from "https://prydain.fandom.com/wiki/Craddoc?oldid=8231"
Community content is available under CC-BY-SA unless otherwise noted.