Start a Wiki
This page contains spoilers. If you do not wish to be spoiled, do not read further.

The Black Crochan was another name for the Black Cauldron, the enchanted vessel of unknown origin, which Arawn Death-Lord employed to reanimate the dead as silent, mindless warriors.

The Black Cauldron was a squat, black pot, half as tall as a man.

"Its ugly mouth gaped wide enough to hold a human body. The rim of the cauldron was crooked and battered, its sides dented and scarred; on its lips and on the curve of its belly lay dark brown flecks and stains, which Taran knew were not rust. A long, thick handle was braced by a heavy bar; two heavy rings, like the links of a great chain were set in either side. Though of iron, the cauldron seemed alive, grim and brooding with ancient evil. The empty mouth caught the chill breeze and a hushed muttering rose from the cauldron's depths, like the lost voices of the tormented dead." -- The Black Cauldron, Chapter 13: "The Plan". 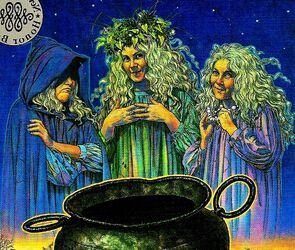 Gwydion told Taran that the Cauldron-Born were "the dead whose bodies Arawn steals from their resting places in the long barrows" and "steeps them in a cauldron to give them life again". These Cauldron warriors were invulnerable to all mundane weapons. A sword buried in their breast would briefly halt the deathless soldier's advance; all wounds were bloodless and had no effect on the Cauldron-Born. The warriors were mute, emanating a "ghostly silence", and evidently felt no pain. In the act of their unnatural resurrection, Arawn destroyed all memory of their former selves; the undying men could only fulfill their master's commands, and to bring others into death's cold bondage.

The Cauldron-Born were vulnerable only to the power of the magical sword Dyrnwyn. Their own power weakened the farther and longer they stayed away from Annuvin.

The Cauldron's precise origins are unknown. According to the enchantresses Orddu, Orwen, and Orgoch, it was they who had owned the pot and struck a bargain with Arawn, who went on to use the Crochan to create his deathless army. However, the Death-Lord kept it beyond the agreed-upon time, and the witches stole it back, absconding with the Cauldron to their cottage in the Marshes of Morva. We are never given to know if the vessel was created by the three witches, or if perhaps it was a product of the Fair Folk's craft. Any similar guess seems equally likely, while the mystery of the Crochan's making remains unanswered. 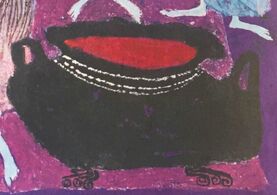 Prince Gwydion convened a council at Caer Dallben and declared his intentions to destory the Cauldron. It seemed that men were disappearing, while more Cauldron-Born had swelled Arawn's ranks. Yet the strategic plan to seize the Cauldron met a snag when it turned up missing! During the quest to find it, Taran and his Companions traded the powerful Brooch of Adaon to the enchantresses; only then did the group learn that the Cauldron's power could only be broken if a living human willingly threw himself into its mouth, a fatal act. After King Morgant absconded with the pot, this final sacrifice was finally achieved by Prince Ellidyr. When he forced himself into the Cauldron it shattered around his corpse.

The Cauldron-Born were neither destroyed nor weakened by the Cauldron's destruction. Arawn used the deathless warriors to assault Caer Dathyl and raze the mighty fortress of the Sons of Don to the ground. Later Taran's band of Commot men harried the undead forces and kept them from Annuvin where Gwydion was pursuing victory. At the top of Mount Dragon, Taran found the enchanted sword Dyrnwyn and with it slew a single Cauldron-Born warrior, leading to the death of all the heretofore deathless warriors. 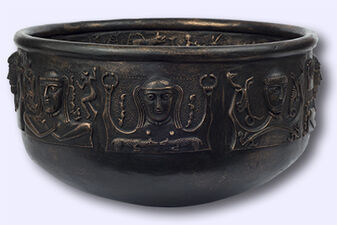 The Cauldron originates in a story from the Mabinogion, "Branwen Daughter of Llyr", featuring Bran the Blessed. In the story, the King of Ireland receives the Pair Dadeni (Cauldron of Rebirth), which can revive the dead, as a gift from Bran the Blessed, king of Britain. Through a series of events, both leaders are caught in a war and, seeing that the Irish are using the cauldron to replenish their numbers, one of Bran's warriors -- Efnisien -- throws himself into the cauldron, sacrificing his life to destroy it.

A cauldron belonging to the ruler of the Welsh otherworld is listed among the Thirteen Treasures of the Island of Britain.  In the poem Preiddeu Annwfn, King Arthur and his Kinghts of the Round Table set out on an adventure to obtain a cauldron with magical properties equivalent to the one in the lists of the thirteen treasures; the owner of said cauldron is Arawn in this poem.  In other versions of the poem, the cauldron belongs to Dyrnwch the Giant, and has the ability to boil its contents depending on the courage of its owner: it would boil slowly if it belonged to a coward, while it would boil instantly if it belonged to a man of courage.  Regardless of the owner, the cauldron acts as a parallel to the Holy Grail that would become prominent in later Arthurian legends. 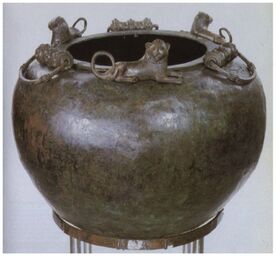 Arthur requests the cauldron from Odgar, the Irish King, but Diwrnach, his son, refuses to give up his prized possession.  Arthur decides to visit Diwrnach, accompanied by a handful of his knights, and is received at his house; when Diwrnach refuses to answer Arthur's request a second time, Sir Bedivere (one of the Knights of the Round Table) takes posession the cauldron and entrusts it to one of Arthur's servants, who is to carry the load on his back. In a single sweep with Excalibur, Lancelot kills off Diwrnach and all his men. A confrontation with Irish forces ensues, but Arthur and his knights fight them off. They board their ship Prydwen and, taking with them the cauldron loaded with the spoils of war, return to Britain. 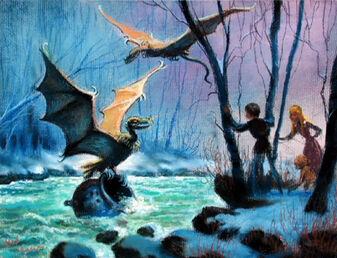 In the 1985 film loosely based on the first two Prydain books, the plot is reworked to make a simple, standalone cartoon. Here the Horned King wants to use Hen Wen to locate the Black Cauldron and resurrect an army of Cauldron-Born warriors. Taran and his friends want to find the Cauldron before the Horned King does, but after Taran gives the Magic Sword to the witches in trade, the Horned King's guards and gwythaints steal it from the companions. The Horned King uses the Cauldron's dark powers to enact his plans for world domination, but Gurgi climbs into the pot to break its spell. The Horned King is sucked into the Cauldron, leading to the destruction of his castle.

The film's prologue and the Sierra game adaptation both expand upon the dark powers of the Cauldron, in the opening narration and the game manual, respectively:

"Legend has it that in the mystic land of Prydain there was once a king so cruel and so evil that even the gods feared him. Since no prison could hold him, he was thrown alive in to a crucible of molten iron. There his demonic spirit was captured in the form of a great black cauldron.

For uncounted centuries the Black Cauldron lay hidden, while evil searched for it knowing whoever possessed it would have the power to resurrect an army of deathless warriors... and with them, rule the world."

The game manual adds a second paragraph to its description of the Cauldron's curse, while a new third paragraph replaces the one from the film:

"As his essence dissolved with the red-hot iron, the evil king cried, 'My power will not die; whosoever uses the Black Cauldron for evil will be all-powerful, for my blood will flow with his, and together we will either rule the world or destroy it.

"For uncounted centuries the Black Cauldron has lain hidden, awaiting the coming of one evil enough to unleash its power. And now, that which the world has feared has come to pass. For the Horned King is just such a one."

The Cauldron made one last appearance in the UK-exclusive and direct to DVD feature Once Upon a Halloween. In the feature, the Cauldron is used by the Evil Queen (from Snow White and the Seven Dwarfs) to summon villains of her choosing, with film clips representing the villains from their movie of origin. Clips from The Black Cauldron film are used as flashbacks to depict how the Cauldron ended up in the Queen's dungeon, and its subsequent use to make her Sleeping Death potion. Taran's deal with Orddu is included, with a word of caution about summoning all the villains.
Retrieved from "https://prydain.fandom.com/wiki/Black_Crochan?oldid=9842"
Community content is available under CC-BY-SA unless otherwise noted.