Prydain Wiki
Register
Don't have an account?
Sign In
Advertisement
in: Characters, The High King Characters, Villains,
and 5 more

Arawn Death-Lord was an evil sorcerer, former ruler of Prydain, and the Ruler of Annuvin, the Land of Death, in The Chronicles of Prydain by Lloyd Alexander. Arawn is the central antagonist of the series; in three of the five books of the series, he worked to defeat the Sons of Don and regain supreme rulership of Prydain, which he had lost when that dynasty of warrior-magicians arrived from the Summer Country at some point in the distant past. 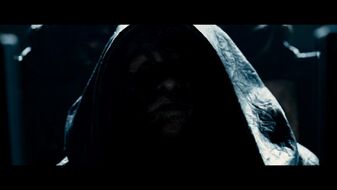 Arawn was never seen in his true form through the course of the series. Even in death, his body was wrapped in a black robe and his head lay face down. Both immediately disintegrated, so his physical features remain unknown.

Arawn rarely ventured beyond the borders of Annuvin, and then only in disguise. One of his greatest powers was the ability to transform into any shape; yet this was also his greatest weakness, for he would then become as vulnerable as the creature whose likeness he assumed such as when Taran decapitated him in snake form. Ordinary people were easily fooled by his disguises, but Menwy the Bard, who seemed to possess some power of truth, was able to see Arawn's true guise. Arawn's former mistress Achren, who had taught him many of his powers, also had the ability to see through his disguises.

At some point, Arawn bargained with the Witches of Morva for possession of the Black Crochan, which he used to engender an army of deathless, silent warriors known as the Cauldron-Born. With his arcane powers he also forged a brotherhood of cruel warriors called the Huntsmen of Annuvin, whose blood oath to the Death-Lord imbued them with superhuman strength, endurance, speed and the supernatural enhancement of their strength when one of their number was slain.

Throughout the series, Arawn showed an obsessive lust for power, repeatedly seeking total domination of Prydain, despite already ruling over a wealthy kingdom. In addition to being a ruthless tyrant, Arawn was a cunning trickster, just as willing to use mendacity and deception to defeat his enemies as military force. Arawn was obviously highly intelligent, as he was aware that Magg and Pryderi conspired to overthrow him, and took steps to ensure that their plans would result in their deaths. When he was mocked by Menwy the Bard, Arawn shattered Menwy's magical harp in a rage.

In addition to his powers, Arawn possessed an extremely cunning, Machiavellian intellect. This is evidenced by his overthrowing of his powerful former mentor, Achren, and his convoluted plans over the course of the stories.

Despite his terrifying demeanor, Arawn seemed to have a cowardly side, rarely leaving the safety of his fortress or engaging any of the protagonists in direct combat. He preferred to slink unnoticed in the guise of other persons or creatures. 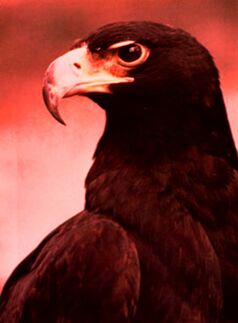 Arawn's malignant influence had more direct effects as well. He captured the gwythaints and enslaved them with his power, changing them from relatively gentle birds into terrifying spies, the "Eyes of Annuvin". He also gained the Black Crochan from the three witches Orddu, Orwen and Orgoch, corrupting that magical cauldron into the instrument that would create his Cauldron-Born warriors. Mortal men who joined with him became the Huntsmen of Annuvin, as fearsome as the Cauldron-Born in their own right. Arawn's powers proved seductive to many prominent leaders, including his champion the Horned King, King Morgant, Magg, and King Pryderi. 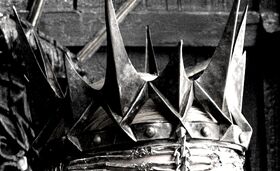 At an unspecified time in the past, perhaps centuries or longer, Arawn was a mortal man until he became the consort of Achren, the Queen of Prydain. After learning her powers of enchantment he betrayed her, usurping The Iron Crown of Annuvin and taking the title of Death-Lord for himself. Arawn would have gone on to conquer all of Prydain had not the Sons of Don arrived from the Summer Country to oppose him. Achren became a servant beneath Arawn, but ever after she secretly plotted his downfall.

It remains unknown precisely when Arawn first gained possession of the Black Cauldron, despoiled the graves of fallen warriors and amassed his army of deathless men. It's reasonable to speculate that he employed the Cauldron-Born to assist his deposing of Achren, though this is far from certain. 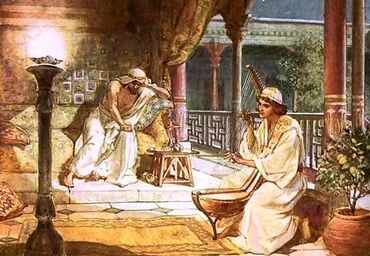 In the story "The Smith, the Weaver, and The Harper", Arawn was the cause of much suffering throughout Prydain. He traveled across the land, disguised through arcane magic, attempting to steal the enchanted tools and recorded knowledge of Prydain's artisans and laborers. The only man able to thwart Arawn in this effort was Menwy the Bard, who perceived Arawn's true face and defied him, letting the Death-Lord shatter Menwy's harp rather than see it lost to the Death-Lord. Instead of using the stolen tools and secrets for himself -- perhaps because he disdained their mundane practicality -- Arawn kept them locked in his treasure house in Annuvin, where the implements and learning would benefit no one. 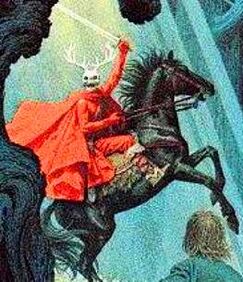 Arawn raised a powerful war leader, the evil Horned King, to amass an army of traitor lords with which to topple Caer Dathyl, the mightiest city in Prydain and home to the Sons of Don. Had Caer Dathyl been destroyed, Arawn might have been able to enslave Prydain. However, with the help of Taran of Caer Dallben and Princess Eilonwy, Prince Gwydion Son of Don destroyed the Horned King, and the army of traitorous rebels scattered back to their dens. 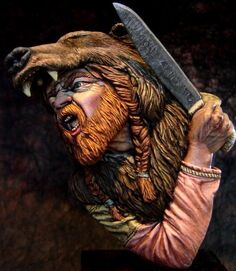 Arawn again sought to conquer Prydain, this time by murdering men outright and using the Black Crochan to turn them into Cauldron-Born. He also released his Huntsmen of Annuvin to deter Taran and the Companions from seizing the Cauldron. Yet the vessel was repossessed by its original owners, the Witches of Morva, before being seized by the cruel King Morgant, who planned to use "the vile pot" to overthrow Arawn and become ruler of Annuvin and Prydain. Morgant was shortly killed in battle, and the Crochan destroyed by the unexpected heroism of Prince Ellidyr. 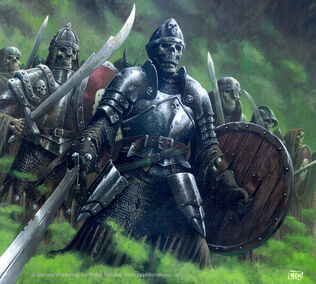 With the Horned King dead and the Crochan destroyed, Arawn's power seemed gravely depleted. However, with the help of the villainous Magg, Arawn arranged to steal the Black Sword, Dyrnwyn, the mightiest weapon in all of Prydain — but the Sword could only be used by one with noble intent. Given Arawn's evil persona, the fiery blade was useless to him, and he kept it sheathed and shut away in a hole beneath a rock at the top of Mount Dragon.

The Death-Lord also allied himself with King Pryderi, who commanded a vast army to topple Caer Dathyl. With the stronghold of the Sons of Don demolished, Arawn sent his legions of Cauldron-Born to conquer Prydain, leaving Annuvin unprotected in the process. Taran, now of age and renowned in parts of Prydain, led the remaining armies of Don to Annuvin. The Companions were accompanied by Achren, who had lost most of her powers but who knew the secret passes into Annuvin.

Pryderi meanwhile plotted to overthrow Arawn and steal his power, as Morgant before him had done. Arawn, aware of this plot, sent Pryderi on a futile and ultimately fatal mission to Caer Dallben to destroy Dallben and the Book of Three.

During the siege of Arawn's fortress, at the top of Mount Dragon, Taran found Dyrnwyn and with it destroyed the Cauldron-Born once and for all. Arawn took the form of Gwydion in an effort to trick Taran into giving him the sword. As Gwydion, Arawn displayed a sharp temper, in contrast to the warm-natured Prince. Thus Taran saw through the ruse and attempted to strike Arawn, but the Death-Lord turned into a shadow and fled.

While Taran's forces gathered in the main gallery, Arawn took the form of a snake and tried to bite Taran, but Achren — who could see through Arawn's shape-shifting powers — grabbed the snake and sustained a fatal bite to the neck. Taran decapitated Arawn with the Black Sword, killing the Death-Lord instantly. The wise enchanter Dallben stated that although Arawn, the ultimate manifestation of evil within Prydain, was destroyed, evil would continue to exist independent of him. 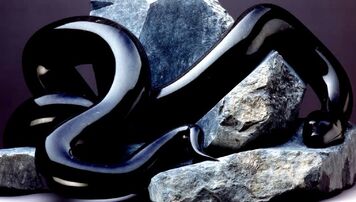 The name Arawn is drawn from Welsh legend, specifically from the story "Pwyll Prince of Dyfed", found in the collection known as the Mabinogion, and in a 16th-century summary of an epic poem called "The Battle of the Trees". There Arawn is king of an otherworldly domain called Annwfn or Annwvyn. However, while the Arawn of "Pwyll" is honorable and forthright, Lloyd Alexander's Arawn was, as the author allowed, "considerably more villainous".

Arawn also appears in Peniarth ms98 (a late 16th century Welsh text), in a summary of the poem "Cad Goddau" which provides details not found in the original poem: 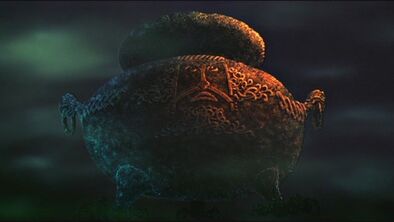 In the 1985 animated film version, Arawn was replaced by the Horned King as the chief antagonist of the story. The animators felt that people would like the Horned King better because he had horns (similar to Maleficent and Chernabog). However, Arawn did receive a small part in the movie. During the prologue, the narrator talks about the history of the Black Cauldron, and how Arawn -- a "demonic spirit" -- came to be trapped within it.

"Legend has it in the mystical land of Prydain, there was once a king so cruel and so evil that even the gods feared him. Since no prison could hold him, he was thrown alive into a crucible of molten iron. There his demonic spirit was captured in the form of a great Black Cauldron. For uncounted centuries, the Black Cauldron lay hidden, waiting, while evil men searched for it, knowing whoever possessed it would have the power to resurrect an army of deathless warriors, and with them, rule the world."

Arawn's face is apparently engraved upon the Cauldron. At certain points in the movie, the face is illuminated. There is a suggestion that the Horned King once served Arawn: the Horned King proclaims that now an old power shall return to this world, implying that he had seen this power before. Further, the animated King might harbor treacherous intent toward Arawn. This is suggested when the Horned King's last words are "Curse you!" -- directed at the glowing face of Arawn upon the Black Cauldron.