Annuvin was a wasteland of dark enchantment, and its very environment was deadly for most living things, especially Fair Folk. The closest Fair Folk way post to Annuvin was that run by Gwystyl; such near proximity to the Land of Death seemed to affect his health and temperament for the worst. Doli himself found that Fair Folk who lingered inside the borders of Annuvin would weaken and die -- until the dwarf discovered that when invisible he was immune to the effect.

The Iron Crown of Annuvin 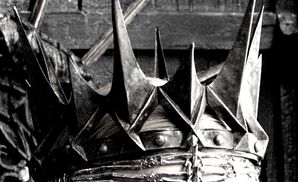 Arawn led many of his servants to believe that one day they, too, could be ruler of Annuvin, but such tales were merely enticing nonsense. To become the Ruler of Annuvin, one must wrest power from the current ruler, or the Iron Crown will burn one to death when placed on the would-be usurper's head. Magg made that very mistake near the climax of The High King. 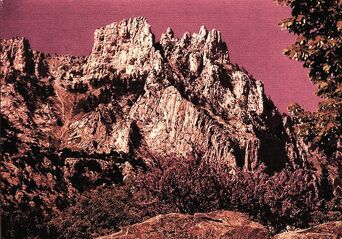 This was the tallest peak in Annuvin, standing north of Arawn's fortress. Because it was impassable to anyone without knowledge of its single, treacherous path, it was the only unguarded entrance into the Land of Death. Mount Dragon was so named because the crest of the mountain was shaped like a dragon with outspread wings. On the the mountainside were many secret pathways and pitfalls, where the unwary would meet their demise. Taran led his war party into Annuvin via the summit of Mount Dragon. The top of the mountain was where Arawn hid the sword Dyrnwyn from the Sons of Don.

The former Queen of Annuvin, Achren, was the only one who knew the paths over the mountain — even Arawn did not have complete knowledge of its passes. When Taran's war band traveled it, Achren used her superior knowledge to give them an advantage over the Huntsmen of Annuvin.

A small peak jutted off of Mount Dragon. Once over the summit, the Iron Portals were a short distance down an unobstructed slope on the other side. The Hall of Warriors (where once stood the Black Crochan), and Arawn's Great Hall could be seen from that vantage point. 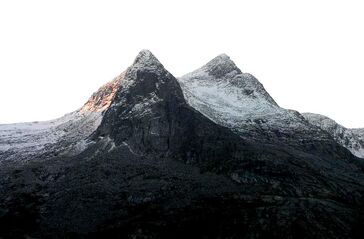 Dark Gate guarded the southern approach to Arawn's realm. It lay between two mountains rife with sharp crags and hidden drops. During the events of The Black Cauldron, the war party of the Sons of Don used this entrance when they attempted to seize the Black Crochan. It was a shorter route but more dangerous to traverse, and thus not as heavily guarded as other entrances to Annuvin.

The Hall of Warriors 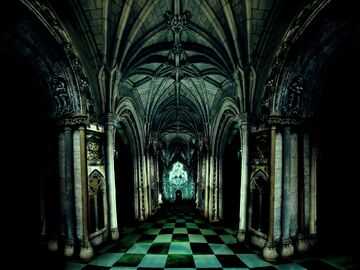 The Crochan once stood here upon a platform; the Cauldron-born assembled here when they were not deployed for battle. The Hall had two entrances, one front portal and a postern door to the rear, which was unguarded. 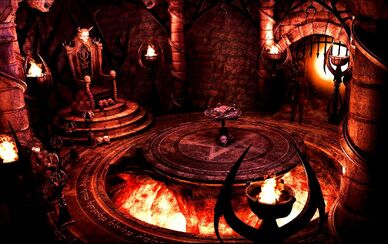 The Hall of the Death-Lord was the building where Arawn held court. From without, the edifice glittered darkly "like black, polished marble"; the black banner of the Death-Lord flapped above it when he was in residence. 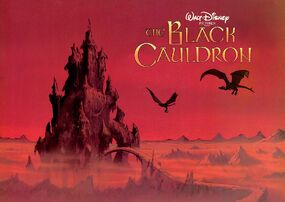 The following locations exist only in the 1985 animated film, as part of the Horned King's Castle which is never named as Annuvin. The details below are purely conjectural and owe nothing to Lloyd Alexander's books.

The Forbidden Forest is a small forest surrounding the east side of the massive Horned King's castle. Taran loses track of Hen Wen here while daydreaming about becoming a great warrior, and along the way meets Gurgi. The gwythaints capture Hen Wen and carry her over a deep thicket and tall mountain into the Horned King's castle. The Sierra game reveals that Gwystyl lives on the other side of this dark forest.

A large moat surrounds the castle. The moat possibly contains alligators; part of it is certainly poisonous. In the movie, Taran is able to drop Hen Wen into a non-lethal section during his first attempted escape. During the climax of the film, Taran, Eilonwy, and Fflewddur use a boat to escape from the collapsing castle. The trio watch the last remains explode from a safe distance.