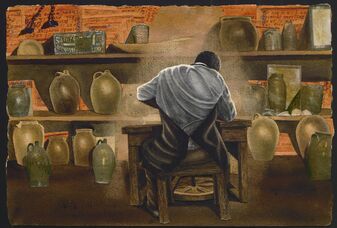 Annlaw Clay-Shaper was a master potter who lived in Commot Merin, the most beautiful of the regions of the Free Commots. Annlaw's ceramic wares were treasured across Prydain, kept in the hordes of cantrev lords as well as in the sculleries of farmers and shepherds. 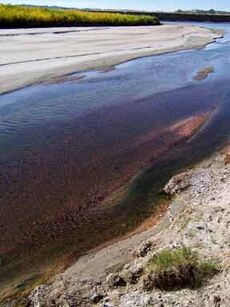 Taran met Annlaw while the potter was delving for clay in the runnel he called Fernbrake Stream. Taran offered to help this presumably feeble old man with his load, and was surprised to discover his strength unequal to the task. Soon after arriving at Annlaw's hut, Taran recognized the potter's wares; the onetime Assistant Pig-Keeper confideded a true love of pottery, and asked Annlaw to teach him the craft. Annlaw agreed, seeing the youth's passion for the art, and taught Taran from the delving of clay to the spinning of the wheel. After many failures, Taran managed to produce one vessel that was "Beginner's work ... but not to be ashamed of." Heartened by this early success, Taran soon found to his dismay that he could not master the skill of pottery -- the one skill, of all the others he had acquired in the Commots, that  he most ardently desired to learn. 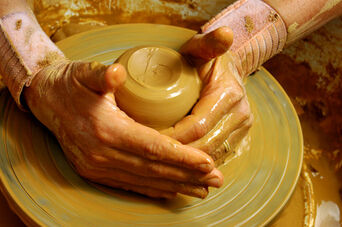 Sensing Taran's disappointment, the potter suggested that he might need help with this or that task; he further asked Taran to take a cart-load of wares to Commot Isav. There Taran encountered Dorath's Company, and after leading the locals to victory over the raiders, returned to Annlaw's hut. Taran lamented he was still a stranger to himself; Annlaw was reminded of the Mirror of Llunet. Taran, abruptly recalling his original quest, set off again at last to find the Mirror.

On his return, Taran explained to Annlaw the events in the cave. As much as he wanted to stay, he told the master craftsman, Taran felt he must return to Caer Dallben.

The two met again when Taran rallied the Free Commots against Annuvin. Their friendship was renewed, but doomed not to last; in Taran's first battle, raiders stormed Commot Merin from the rear, putting it to the torch and killing its residents -- including Annlaw.