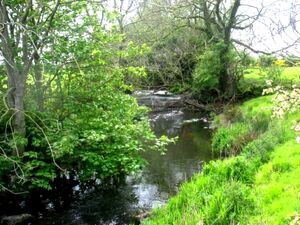 The River Alaw was a river that ran through the Hills of Parys on the Isle of Mona. The Alaw was a fast-moving waterway that flowed into the bay surrounding Mona, and to the rock on which Caer Colur stood.

If its source and direction of flow were comparable to that of the real River Alaw on the real Isle of Anglesey, the Alaw's source lay in the north center of the isle, and it flowed southwestward.

Magg reined up his and Eilonwy's horses on the banks of the Alaw, and transferred the gagged and bound girl into a boat which he rowed into the 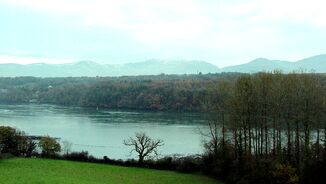 bay and to Caer Colur, into Achren's waiting clutches. Eilonwy dropped her bauble on the riverbank; Taran and the Companions later discovered the tracks of the freed horses and the line of the dragged rowboat. Prince Rhun found the bauble nearby. The group made a raft from vines and branches and sped down the river but the raft soon collapsed; while they were repairing it, Rhun pulled up a vine that caused a collapse near the eroded riverbank. The hole into which he fell opened up into the caves where the companions found Glew.
Retrieved from "https://prydain.fandom.com/wiki/Alaw?oldid=6574"
Community content is available under CC-BY-SA unless otherwise noted.