View source
This page contains spoilers. If you do not wish to be spoiled, do not read further.

Achren was an enchantress and former Queen of Prydain who was once allied with Arawn Death-Lord. She ruled the land for many years as a harsh and vengeful tyrant. Her original seat of power lay in Annuvin, near Mount Dragon. After Arawn displaced her she continued to serve him from the fastness of Spiral Castle.

Prince Gwydion called Achren "beautiful, yet very deadly." She had silver hair but otherwise possessed all the beauty and vibrancy of a woman in her prime. She likely kept her youthful appearance through enchantment; Princess Eilonwy once remarked that she was "older than she looks." While enthroned at Spiral Castle, Achren wore a scarlet robe festooned with jewelry; later she wore an unadorned black robe. According to Eilonwy, jewelry did not become her.

Achren was proud and ambitious, vengeful when crossed, and merciless when doling out punishment to captives or underlings. Given to fits of rage that fueled her drive for victory, in defeat she was became morose, even suicidal. 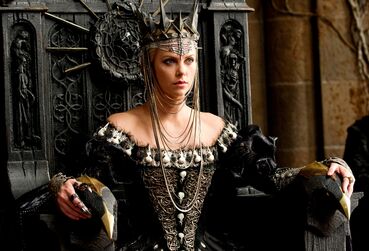 Prior to the Rise of the Horned King

Achren knew deep enchantments, and taught Arawn many magical secrets -- including those of transformation -- before he wrested from her The Iron Crown of Annuvin. For this act of usurpation Achren secretly despised the Death-Lord, but she continued to serve him as an underling, at least until the fall of Spiral Castle. While that castle stood she pretended to be Eilonwy's aunt, and was teaching the girl enchantments before Taran's arrival there. 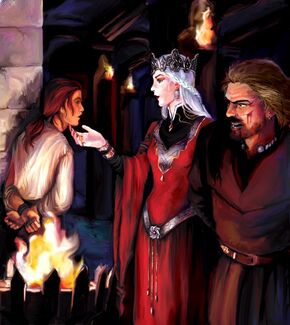 Achren employed some of Arawn's Cauldron-Born warriors to take Gwydion, Taran and Melyngar to Spiral Castle. After Gwydion refused to join her as an ally, in a fit of rage she broke his sword with her own bare, bleeding hands and had him and Taran imprisoned. Her "niece" Eilonwy met Taran in his cell, and was punished by Achren for speaking to him; Eilonwy easily escaped the room in which the enchantress imprisoned her, by using a tunnel of which Achren had no knowledge.

Achren was presumed dead after Taran and Eilonwy escaped and the castle collapsed. Later, Gwydion revealed that Achren enticed him to join her in a bid to overthrow Arawn so that she could once again rule Prydain. Gwydion of course refused again, and Achren had him tortured, body and spirit. 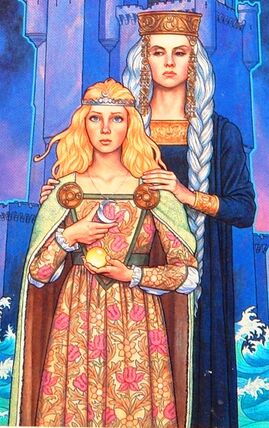 Achren returned to kidnap Eilonwy when the Princess went train to be a lady on the Isle of Mona. The Chief Steward of Mona, Magg, kidnapped her and took her to Achren at the ruins of Caer Colur, where Achren bewitched the girl. Evidently Achren planned to use the Princess's ancestral magic powers to rule Prydain while under her, Achren's, control. When Taran and his companions arrived at the ruins, Prince Rhun accidentally mentioned the Golden Pelydryn to Achren. 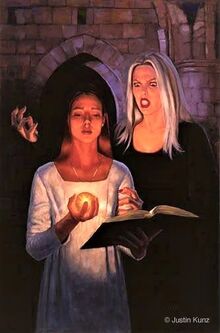 Gwydion was forced to reveal the powerful item's location, and Achren gave it to Eilonwy and commanded her to read the spells from the Book of Llyr. However, touching the Golden Pelydryn helped Eilonwy fight Achren's enchantment, and she burned the book instead. Achren's bid for power was once more undone.

After her defeat at Caer Colur, Achren went to Caer Dallben, where Dallben accepted her and she took up the role of scullery maid, previously filled by Eilonwy, who was still away at Mona. 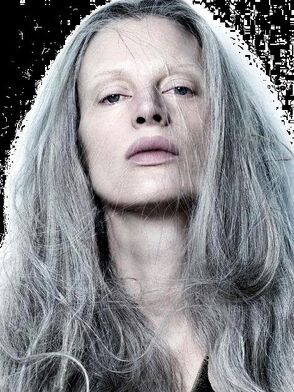 Achren fled from Caer Dallben to seek revenge on Arawn before the companions could restrain her. After being attacked and left for dead by Magg (now working for Arawn) and later wounded by a number of gwythaints, Taran's band found her close to death. Healed of her wounds, she led them past the dangers of Mount Dragon, through a secret pass and into Annuvin.

Achren met her demise when Arawn, disguised as a snake, came close to biting Taran. Achren then threw herself to the ground and wrested Arawn away from Taran, and the serpent bit her on the throat. She later died from the injury, but with the destruction of Arawn she finally found peace. The companions carried her body into Arawn's Great Hall in all honors, in gratitude for her final sacrifice.

The name Achren appears in Peniarth ms98 (late 16th century), in a summary of the poem "Cad Goddau" which provides details not found in the original poem:

Further, Elizabeth Lane in her 1973 essay "Lloyd Alexander's Chronicles of Prydain and Welsh Tradition", points out "an affinity" between Achren and the Welsh legenday character Arianrhod, sister of Gwydion, with whom a labyrinthine fortress, similar to Spiral Castle, is associated.